The Mk-7 Anti-track mine resembles a square plastic carrying case or flattened jerry can, 4 inches deep and 10 inches to a side. It has a moulded carrying handle and weighs around 11 pounds. The basic mine contains virtually no detectable metal although optional fusing systems may change this. The design has been widely copied. Outer casing is typically a mud-brown colour although grey, green and pale-sand colours are also produced. The pale-sand model also works well in snowfields.


The Mk-7 Anti-track mine is a pressure-activated and can be scattered from ground vehicles, helicopters and low-flying aircraft, or can be manually buried. The mine is non-buoyant, waterproof and can be operated to a depth of 1 yard underwater. The mine is either surface-laid or buried down to 70 mm below the ground surface.


The Mk-7 Anti-track mine is provided with a double anti-shock device operating mechanically and pneumatically. This device prevents the mine from being triggered when an impulsive load is applied onto the pressure plate, caused either by an accidental drop, when scattered by a helicopter dispenser, by the detonation of a nearby or suspended explosive charge, or by the action of fuel-air explosive mine-clearing systems.


The hinged pressure plate on one face of the mine has glass shear pins and the sensitivity of the mine can be varied by changing these pins for ones of a different diameter or wall thickness. The plastic casing also has several auxiliary fuse wells. The mine can also be fitted with optional anti-handling devices, electronic proximity fuses or a tilt-rod fuse kit.


The Mk-7 is of limited effectiveness against modern fighting vehicles but can disable them by cutting a track or destroying a wheel. It is effective against soft-skinned vehicles and many military cybershells.


Somewhat obsolescent, the Mk-7 remains in wide use due to its low-cost, simplicity and versatility. Many organisations use the Mk-7 as a convenient demolition and satchel charge. Typically one fuse well will be fitted with a pull-igniter and a ten-second length of fuse in addition to any more sophisticated detonation systems.

GURPS source material generally uses the US version of the Imperial system. If you are more comfortable with metric measurements. this is generally not a problem. 4e mainly uses just yards and pounds, or units derived from these, so the only conversion numbers you need to remember are 0.914 and 2.2.
Other Imperial units such as cubic feet or cubic yards can usually be treated as arbitrary game units. There are 27 cubic feet in a cubic yard. A cubic yard is 0.765 cubic metres. A cubic yard of ice weighs about 0.77 short tons, or 1,549 lbs. Some parameters, such as jumping distances, are initially calculated in feet or inches. Divide by 3 (feet) or 36 (inches) to get yards. A square yard is 9 square feet.

Times Eleven Trick.
Modified from “Rapid Math Tricks and Tips” by Edward H. Julius. To multiply by 1.1 (metres into yards) write the original number then beneath it write the same number, with the decimal place shifted once to the left. Add these two numbers. To convert kilos into pounds use the same process and double the final result.

Temperature can be a problem. Many rules are written referring to 10˚(F) increments, for example:
p.B9 tells us “one Fahrenheit degree is 5/9 the size of a degree Celsius” and “To convert actual thermometer readings, subtract 32 from the Fahrenheit temperature and multiply the result by 5/9”.

More convenient is to remember the approximation that:

Hence when a rule talks of “for every 10˚ change in temperature” it can be read as “for every 5˚C change...”. The comfort zone defined in Temperature Tolerance on p.B93 can be read as being: “For ordinary humans, this zone is 30°C wide and falls between 1°C and 32°C”. See here for a different approach to GURPS and metric.

Space Travel.
While on the subject of useful formulae and conversions a useful one for Transhuman Space and other space-based campaigns is:

It is easier to deal in interplanetary distances in Astronomical Units (AU) rather than millions of miles or kilometres. An Astronomical Unit (AU) is an unit of measurement approximate to the average distance from the Earth to the Sun. For game purposes one AU is approximately 93 million miles, 150 million km, 500 light-seconds or 8 ⅓ light-minutes.
The speed of light is approximately 186,000 miles per second or 300,000 km/s. Therefore a light-second is approximately 186,000 miles, 300,000 km or 1/500th of an AU. Light-lag in seconds is distance in AU multiplied by 500. Double this for a two-way communication.

Falling Distances and Velocity.
Page 431 (4e) of the basic rules gives a table of velocities for falling objects. Alternately the formulae below can be used using a value of 10.72 yards/sec2 for “g” on Earth. For other planets multiply this value by the relevant scaling factor (eg: 0.38 for Mars, 0.9 for Venus, 0.17 for Luna). Increasing density of atmosphere or fluid the object is falling (or sinking) through will reduce velocity.
“t” is the time in seconds. “d” is the distance fallen in yards in “t” seconds. “vi” is velocity in yards per second after “t” seconds of falling.

“va” is the average velocity in yards per second for an object that has been falling “t” seconds.

The above does not consider air density, which would become significant during a long fall. A useful calculator for this can be found here:

Falling Damage: To compute falling damage under gravity other than 1 G. figure the damage that would have occurred under 1 G. per p. B131.[3e] then multiply it by the local gravity. E.g.. a fall that is computed to do 12 points of damage (before DR is taken into account) would do 24 points of damage under 2 Gs. but only 2 points under 0.16 G.
Falling Objects: Use a similar procedure for determining the damage done by falling objects. Those interested in absolute realism should be aware that terminal velocity (the maximum speed at which an object can fall before air resistance) is decreased in low gravity. More importantly terminal velocity is lower in a thick atmosphere, higher in a thin atmosphere and unlimited in vacuum! So the effective maximum fall (200 yards for most objects; 50 yards for people, who have high air resistance) may vary widely. A general formula: terminal velocity is multiplied by 0.25 in a very dense atmosphere (Venus), 0.5 in a dense atmosphere (Titan), 1.5 in a thin atmosphere (like some space colonies maintained at low pressure), and 2 in a very thin atmosphere (Mars). It is unlimited in trace atmosphere or in vacuum.

The only GURPS stats for a water cannon that I can find are in GURPS Vehicles 3e  (p.118) and these omit certain criteria that one might wish to know. The table below attempts to adapt those rules to TS 4e. It is assumed that the water cannon is mounted on a suitable vehicle. Being intended for TS this system is a little lighter than those of earlier TLs. Total weight of a system is dependent on the reservoir capacity, maximum number of shots being represented by “S”. Volume of the reservoir tank can be taken to be S x 0.08 cf. Each shot of liquid weighs 4.25 lbs. A single, totally filled, 100 shot small water cannon therefore weighs 20+25+425 = 470 lbs and has an 8 cf tank. A reservoir tank may supply more than one projector. Each additional projector weighs 20lbs if small, 40lbs if medium and 80lbs if large.


LIQUID PROJECTOR (Water Cannon) (DX-4 or other Liquid Projector-4)
A water cannon is treated as a jet (4e p.B106) but using the 1/2D and Max ranges given on the table. It does no damage and instead has a knockback effect. It does the equivalent of up to 4d damage for calculating knockback.


Knockback rules are for every full multiple of the target’s ST-2 rolled, move the target one hex away from the water cannon. A target that has no ST or is not resisting uses HP instead (4e p.B378). Knockback into something hard may cause actual damage. (GURPS Vehicles 3e suggests 1d per 2.5 hex of knockback).

Potentially a water cannon can have dyes, irritants or malodorants added to the water. Some versions have a separate reservoir allowing the operator to only use additives when desired. In practice such additives are seldom used since their use in a water cannon can result in a major clean-up problem!


Brine-Thrower.
The availability of compact, efficient refrigeration units allowed the development of a variant known as a brine-thrower. The addition of additives such as salt to the water allows it to remain liquid when chilled to below normal freezing point. Treat as a normal water cannon but with a follow-on effect similar to being immersed in arctic seawater. Every minute roll against health or lose 1 FP. Normal clothing, including winter clothing provides no defence. A diver’s drysuit, high levels of cold tolerance or something water-tight such as a battle-suit may provide some protection.

Originally derringers were designed to use a large-calibre bullet in a small weapon. During the twentieth century derringers were manufactured in a wider variety of calibres. In 2100 the most common models of derringer fire standard 10mm and 4mm caseless pistol rounds. The short barrels of these weapons reduce the effectiveness of these high-velocity rounds. Recoil makes follow-up shots slow and muzzle flash and noise is noticeable! 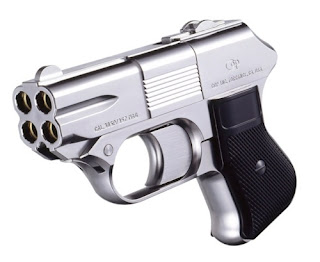 Four-barrelled versions with a passing resemblance to the COP inc pistol are also available. These weapons are often used as the model for minimal/non-metalic firearms. Stats are the same as for metallic derringers. Derringers, or firearms bearing some resemblance to them, may be concealed or built into other objects. This may affect bulk and weight. Some such weapons may be single-shot.
Guns (Pistol) (DX-4 or most other Guns at -2)