“Yeah. They are exactly the sort of thing you would expect the army to come up with. A lot of the guys call them CLODs rather than CLAWs. I’ve heard them called “pigs” or “doggies” too, but what they most resemble are pygmy hippopotamuses! Armored pygmy hippos! Heah, heah.
“On the plus side, they are well armored! Like the Tiger tanks of ground cybershells! They’ve only got four legs but they are incredibly hard to disable. You can bathe the CLODs in lead and grenades and they won’t slow down, they just keep trudging forwards.
“But they’re slow! Seldom do you see them moving faster than a brisk walk. Theoretically they can run, but it’s seldom done. With the shaking the joints get the maintenance afterwards is a nightmare. Don’t run them unless you do not expect to use them in the near future. They’re not too good at braking or changing direction if you run them, either! Seen ‘em plough through a brick wall. Seen them collide and trip each other up. That was a sight! 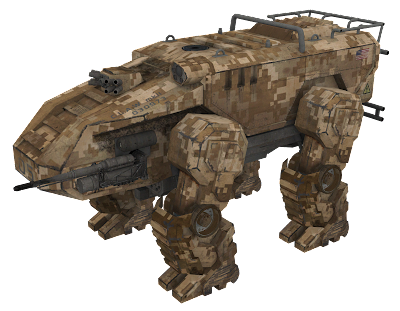 “The gun is in the nose. Well, it’s in the body actually, but you know what I mean. They’ve a limited arc of fire and have to do that shuffle thing or change course to traverse. They have trouble tracking fast crossing targets. They can be flanked too. Use them in groups or use other forces to cover them.
“They tend to get left behind during fast-moving operations. They’re best used to guard your flank or beef up a defensive position. Just like they used them at the town hall in Vancouver.
“The first ones had that microcalibre minigun and a couple of grenade tubes. Most of those got replaced when the 7.5mm MG came in. That was much more practical. Quite a few of them now have those air-burst grenade launcher machine guns instead. [High-Tech 4e p.144 “M307”] Good thing is they all come with a big supply of ammo. You can mount a couple of smart anti-tank missiles on each side, but generally it is only done if there is an armor threat. Army thinks they are vulnerable there and might blow up the CLOD.
“We used to like that rack thing they have on top. You can hang quite a few rucksacs on a CLOD, which beats having to carry them yourself. Not that that is a problem for me anymore since I got uploaded. 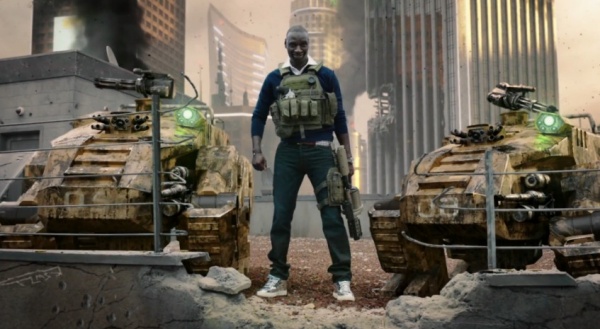 “The first CLODs were fielded something like thirty years ago. They’ve been upgraded a few times so I expect they will be used for at least another decade. Army and marines have still got hundreds. State and National guards have quite a few and so do the air force. Even a few police forces.
They are not by any means the best combat systems out there, but they can be useful. They're tough! The world tends to mark what the US Army does, even their not so good ideas! The Chinese, the Iranians and the TSA have all copied the CLOD and fielded their own. A whole bunch got given away as military aid and have ended up all over the place. Chances are you are going to run into them sooner or later.”