“That depends upon what class of weapons our future clients will want: Sparrows, Crows or Hawks?” was Oyama's cryptic reply.
Oyama went on to explain that the supra-technology (ST) weapon systems being developed under Copp's direction were far in advance of the ET systems in service with the superpowers. They fell into three groups, named after birds. The Sparrow class comprised a number of light 'fire and forget' anti-tank, anti-air and anti-personnel missiles, named after small birds, which would 'lock' onto whatever target was being engaged when the firer pulled the trigger. Having a much higher velocity than the comparable ET weapons of the superpowers, they were much more difficult to decoy. They also had a markedly higher lethality and hit probability. The Crows were a family of larger medium range 'maids of all work', which were replacing almost all the conventional mortars and artillery in the field armies. And Hawks were long range killers that Oyama described as the creators of nuclear scale destruction by non-nuclear means, hence with no radiation side effects. Naval and air weapons were modification of the same three basic families.

Pan-Asian Armaments classifies its missile products as belonging to one of three classes: Sparrows (Suzume), Crows (Karasu) and Hawks (Taka). This system has been adopted by some other manufactures and the terms are used generically in certain circles.


Sparrow-class weapons are man-portable and range from 15mm micro-missiles to large calibre anti-armour and demolition munitions. Typically Sparrow-class munitions need to be aimed in the general direction of the intended target.


Crow-class munitions typically are vehicle-mounted systems, usually using vertical launch mechanisms and manoeuvring towards their target after launch. A good example of a Crow-class weapon is the 200 mm Raven, essentially a version of the Jaguar missile described elsewhere. Like most Crows the Raven is modular, allowing motor, guidance and warhead to be varied to suit the customer's needs.


Two models of Crow-class weapons are of particular interest.


Bushcrow.
The 107 mm Bushcrow is a weapon that can trace its origins to Chinese-made rocket systems popular with guerrillas in the latter half of the 20th century. The Bushcrow is designed as a Crow-class weapon that has a level of man-portability. The missile is shipped in a cage-like framework that also serves as a launcher. Thin sheets of plastic may be attached over the spaces of the frame for additional weather protection. These are usually removed when the missile must be man-carried. Carrying straps are easily attached to the launch frame. While typically used by dismounted fighters, vehicles may be fitted with racks from which one or more missiles can be fired. Used frames can be reused or put to various other purposes.


To use the Bushcrow the carrying frame is simply propped at an upward angle. The guidance system of the missile means that the positioning does not need to be that precise. The missile can be programmed to launch at a selected time after activation, allowing the unit that carried it to be far away when it fires.


The guidance system of the Bushcrow makes it a vastly more effective weapon than its simple rocket ancestors. The most basic version uses INS/GPS to attack a programmed location. More advanced versions can be programmed to select specific targets within the target area. Fuse options include impact, delay and airburst. The most commonly used warheads are HEMP or a 3 lb octonitrocubane high-explosive warhead that also scatters high-velocity incendiary pellets. 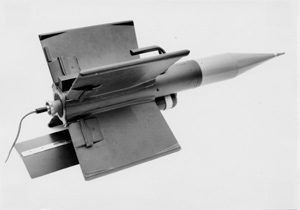 Nutcracker.
The Nutcracker can be seen as intermediate between the Sparrow and Crow-classes. It is a 150 mm calibre missile with large cruciform wings. It weighs 25 lbs and has a carrying handle on its “upper” side. In the infantry role the Nutcracker does not need a tube, rail or any other form of launcher. Nutcracker missiles may be placed in various locations and activated remotely as needed. The Nutcracker has two launch options.


Like most members of the Crow-class the Nutcracker can be launched vertically. To facilitate this the trailing edges of the wings are concave and the tips shaped into supports upon which the missile can be stood. This raises the exhaust an adequate distance above the ground.


The Nutcracker can also be launched horizontally. The missile is positioned with the carrying handle uppermost so it rests on its two lower wings. The missile automatically detects its orientation so when launched it fires a small cartridge located between the lower wings. This jumps the missile upwards and forwards at an angle of about 20 degrees. The main motor then ignites to propel the missile towards its target. Horizontal mode allows the Nutcracker to be used from positions with overhead cover, such as forests or inside buildings.


The Nutcracker usually has a SEFOP or HEMP warhead but can use any warhead intended for 150mm Sparrow and Crow-class munitions. Range is 4,500 yds and velocity 500 yd/s.